Today I’m going to talk a little bit about multithreading in Java.

A thread is a small component of a process, that can run concurrently with the other components (threads). It differs from a process in several ways but the most important thing is; threads share the same state, while processes are independent units. This means that all threads of a process share the same process state, memory space and resources. 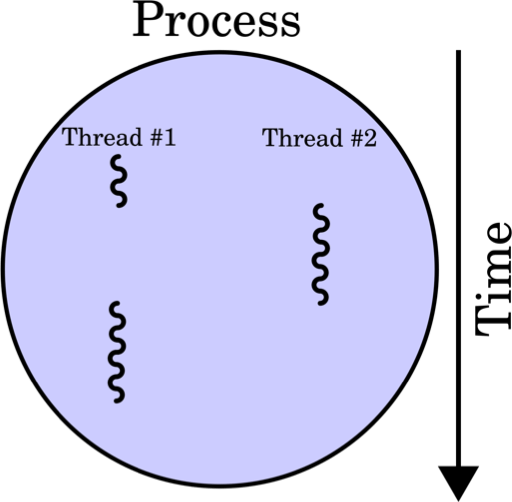 You can think of it as a worker, working in parallel with other workers. Let’s say that your house needs painting. If you hire 1 worker, it’d take him 10 hours to paint the entire house. But if you hire 5 workers, and if all of them work concurrently on different parts of the house, it’d take only 2 hours. Also, they share the same resources (paint) and the same space (house). This is just how the threads work.

Life Cycle of a Thread

A thread’s lifecycle consists of different stages. For example; a thread starts, waits for another thread to perform a necessary task, executes its task, and dies. It can be in only one stage at a given time. The life cycle of a thread is controlled by JVM.

Here are the stages in detail:

Now, let’s get to our main subject: multithreading.

Multithreading is the process of running multiple threads of a process at the same time. Let me start by creation of a thread.

There are some useful methods of Thread class which we are going to use:

It is as simple as extending the Thread class and overriding the run method. Example:

Actually, what we did above was just implementing the Runnable interface. It is also possible to explicitly implement that and create a Thread object with that implementation. The Thread class has a constructor which accepts a Runnable object. Example:

There are also other ways to run these workers. One of them is creating a thread pool. I’m not getting into its details but here is a simple example with the same MyWorker class:

It is the dirty way of creating a thread. Same as option 2, but just dirtier. Example:

We say that all threads run concurrently; but in reality, it is not the case. It feels like it is a concurrent environment, but your system cannot run all of your threads simultaneously. There is a thread scheduler in JVM that decides which thread to run, based on many factors including priority. Every thread in Java has a priority between MIN_PRIORITY and MAX_PRIORITY. If you don’t set it, its default is NORM_PRIORITY.

It hopefully determines the order of execution of the threads; however, it doesn’t guarantee it. As I’ve said, it’s just one of those many factors. Example of thread priority:

This is it for now. Next time I’ll get into the details of multithreading and talk about java.util.concurrent package. Have a great day!